Warning: Your Internet Explorer TLS settings may not be updated with the latest security settings. To fix this issue and resolve any connection errors,
×

• Open Internet Explorer
• Go to the Tools menu on your computer (the icon shaped like a gear—just below the “X” to exit the program)
• Select Internet Options from the drop down menu
• Select the Advanced tab
• Find the item on the advanced menu that says Security
• There should be three items called “TLS” (1.0, 1.1, 1.2). Make sure the box next to these three items is checked and click Apply
• Close your browser and reopen Internet Explorer to refresh changes

By Arnold Melnick, DO, FACOP

This is 1946. This is the Waldorf-Astoria Hotel in New York. This is the Annual Meeting of the ACOP. This is Arnold Melnick, a lowly intern at Osteopathic Hospital of Philadelphia, with a burning desire to become a pediatrician, who chiseled two days off to try to learn some pediatrics at this meeting.

But wait a minute! I looked at all the ballrooms like this and couldn’t find the ACOP. Finally, I found a small, side Conference Room with a small table in the corner. The 15 or so ACOP members around that table were the 1946 ACOP Annual Meeting.

I sat through an afternoon with no additional pediatric knowledge but with an improved understanding of the ACOP organization. As soon as the meeting ended, Helen Hampton, who was President, approached me with a pile of papers and asked, “Will you be good enough to review these tonight and give a brief summary at tomorrow’s session?” So my brief discussion the next day on the brand new field of child development became only the second educational presentation at an ACOP Annual Meeting. That was 70 years ago and the start of a 70-year love affair between me and ACOP.

Seventy years ago, pediatricians usually limited their practices to infants under one year of age. The reason: infectious diseases overwhelmingly predominated their practices and there were no anti-infective medications or antibiotics. (That accounts for the famous picture of the doctor sitting by the bedside of a dying child, painted in 1887 by Sir Luke Fildes.) Actually he had little to fight the illness – except kindness, sympathy and support. Ultimately, as the specific drugs appeared in the 40s, the upper age of our practices rose to 12 years (where it was when I entered practice), then to 16 and today it varies from 21 to 25.

Thanks! Today, I appreciate being invited to give the Watson Memorial Lecture and especially being the only person to give it three times. I know I have slowed down, but it didn’t take me long to realize that I was not expected – being almost 95 and not having seen a patient in almost 40 years – to give the latest treatment of premature infants or discuss the newest cardiac drugs. I was invited because I am the only living member who has lived through 70 years of ACOP activity. So I’ll try to give you my view of many salient happenings in those 70 years – and throw in a few comments on key things that I think took us from…

Rejection and Discrimination to Recognition and Acceptance

When I was in medical school in the 40s, we faced a deadly plague – called “the draft board.” Medical students and graduates were all subject to being drafted into the medical branches of the armed forces. But DOs were declared “quacks” by the AMA, and the medical services (whose medical decisions understandably followed AMA standards) refused to grant us commissions in their medical corps. And that also meant that osteopathic students had no deferments and had to face draft board actions. I survived by virtue of a repeated 4-F classification (physically unfit for military service – vision).

However, the general policy brought agony to us and we chafed at the discrimination. But in retrospect, there was what I believe was a positive effect. Massive numbers of practicing MDs were drafted, leaving their neighborhoods bereft of adequate medical services. As a result, those “stranded patients” almost had to go to a DO. Many of those patients learned that DOs were “regular doctors” (so did their friends and neighbors) and many remained with the DOs after the war. This created a steady stream of thousands of patients for DOs and the pool of “osteopathic “patients grew exponentially, forming a basis for continued and increasing influence.

I believe this was a major tactical error on the part of the AMA – they literally chased patients to osteopathic physicians – unconsciously, of course. Thereby, we developed a larger cadre of osteopathic supporters than any advertising or publicity could possibly have created. So much so, that DOs accidentally reaped a huge impetus in public recognition and acceptance.

At the time of my internship, there were only two osteopathic residencies in Pediatrics and they were in California. So when I finished my internship, I went into what was then called General Practice. That was the route all previous DO pediatricians had taken. I also did what they did – I arranged to study Pediatrics at the feet of practicing pediatricians. This time, however, three of us exerted pressure on PCO and on Dr. Bill Spaeth (Department Chair) to set up a preceptor-type training program for us. The other two candidates were Otto Kurschner, a classmate of mine, and Thomas Santucci – that’s Tom, Senior – all friends and colleagues. ALL BECAME CHIEFS!!!

Our routine was to work under Bill, Jim Purse and Harry Breitman in the twice-weekly Pediatrics Clinic, with occasional lectures thrown in, plus hospital rounds almost daily – sometimes there were as many as six pediatric patients in the pediatric wards. And we were involved with examination and care of all infants in the Nursery. After five years, we also earned the degree Master of Science in Pediatrics from the College, plus becoming eligible for ACOP certification, both of which all three of us achieved.

Meanwhile, I was in private practice, limiting myself after my first year to Pediatrics. Let me tell you about “practice”. First, “doctors” at that time essentially consisted of “neighborhood physicians” and “specialists.” When I started, the neighborhood physicians or “general practitioners” usually opened offices in their homes and serviced overwhelmingly that particular locale. “Specialists” were either located at the local area hospital or occasionally had a centrally-located office.

In the 40s, a routine office visit cost $2, with an occasional additional charge of $1 for injections, such as vaccines – and we only had DPT and DT vaccines to offer. House calls – the now almost-forgotten time when doctors packed their “doctor bags” with all their equipment, and went to the patient’s home because the patient was too sick to get to the office. The charge: $3 – and let me tell you – that extra few dollars a week for house calls were very helpful to physicians’ incomes.

Plus consider these facts:

Let me try to delineate some of what I consider 10 of the highpoints of ACOP’s progress – adding occasionally some important steps to our wide acceptance:

As I end my 70 years of ACOP observation, I must add two additional progress notes of importance. First, this meeting – a combination of educational programs of ACOP and AAP – is certainly a great forward step. And forthcoming soon, the new ACGME, combining graduate education efforts of both professions, holds hope of great progress for DOs and MDs alike.

There it is. Ten salient features that I feel were significant points in the 70 years that I have observed – and been active in – ACOP. There are many, many more people and events that could have been recalled and may be important or significant to other members. But these are mine.

I would be pleased to answer questions or hear your comments at the end of my lecture.

I have taught public speaking periodically throughout my career, One thing I always emphasized, “Don’t end your talk with a mumbled ‘thank you’ and sit down. If you want to thank the audience, make it meaningful.”

ACOP Members enjoy subscriptions to our quarterly newsletter PULSE and the eJournal publication. eJournal is a valuable teaching portal for students, fellows and attending physicians who strive for a scholarly existence. 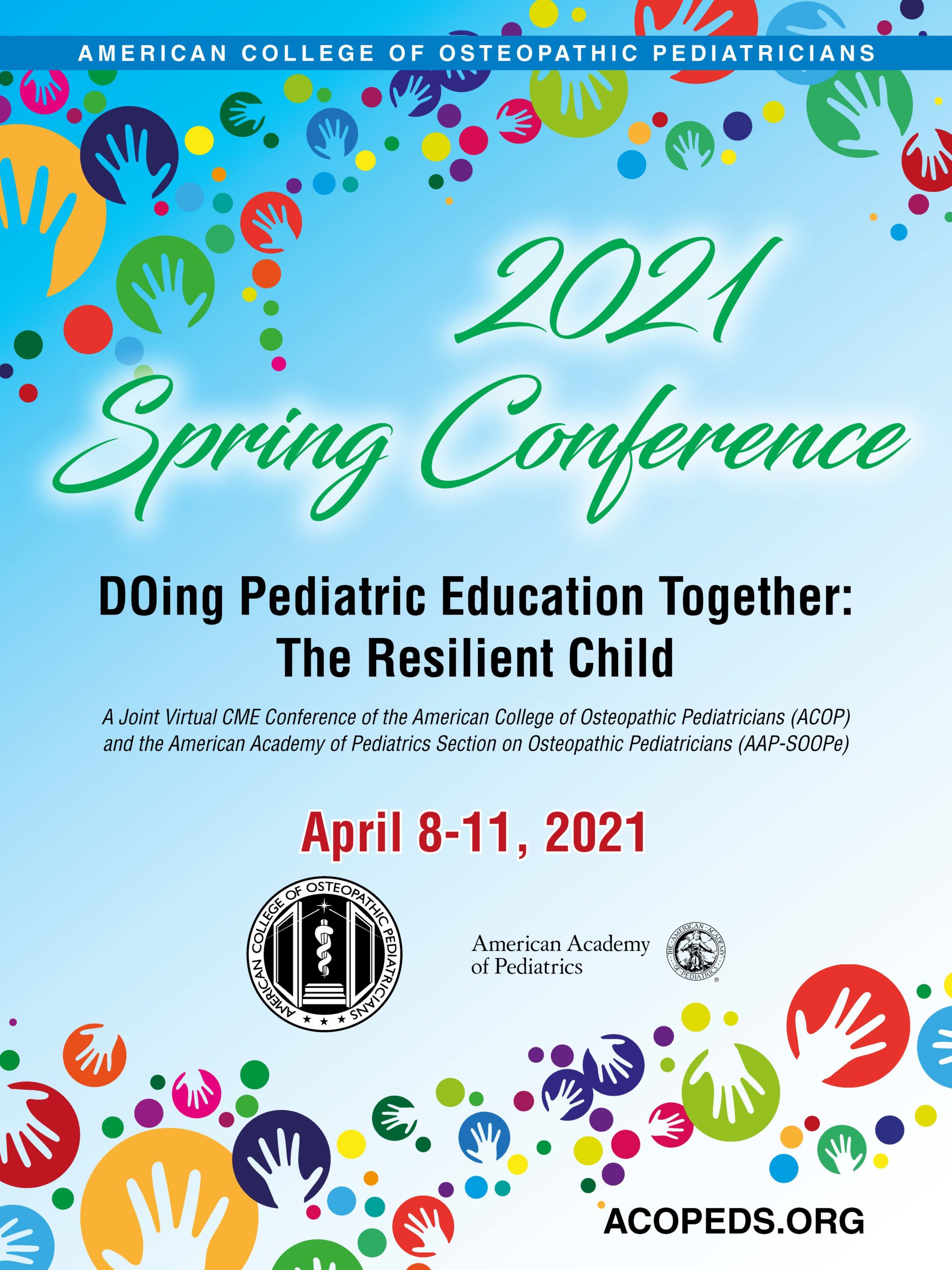